2 Daring kids at Pope’s audience are lesson on prayer, he says

"They have given us an example of how we need to behave with God, with the Lord: Go ahead! He is always waiting for us."

This November 9, two children surprised the Pope with their daring and sense of freedom during his Wednesday public audience.

The kids – a boy and a girl – walked onto the stage during the reading of Scripture, as the Pope gestured to the security guards to allow them to approach. He mentioned them as he started his weekly address

“Before beginning to speak about what I have prepared, I would like to draw attention to these two children who have come up here,” he said. “They did not ask permission. They did not say, ‘I am afraid.’ They came up directly.”

Using their example, the Pope gave a lesson on prayer:

During the catechesis, the kids re-approached and the Holy Father invited them to sit down at his feet for a portion of his address; the Bishop of Rome reflected on his trip last week to Bahrain. “Here are the two brave ones of today,” the Pope said.

He also commented that “it’s a bit cold, isn’t it? but it’s beautiful,” as he seemed content to be joining the public for another general audience in St. Peter’s Square.

Young assistants to the Pope

This isn’t the first time that the Pope has been “assisted” in his weekly audience with a young helper.

In October of last year, a boy joined the Pope at the front of Paul VI Hall. The Holy Father again reflected that the child was giving a lesson to everyone:

And Jesus tells us: “You too, if you do not behave like children, you will not enter the Kingdom of Heaven.” The courage to approach the Lord, to be open to the Lord, not to be afraid of the Lord: I thank this child for the lesson he has given us all.

Some months later, the mother of that boy reported that the encounter might have resulted in a miracle.

Young and old together

In August, another daring little boy approached the Pope. This time, the Holy Father noted how the child seemed to illustrate the lesson the Pope was giving on the needed alliance of youth and the elderly.

“In the general audience, we’ve spoken of the dialogue between the elderly, and” — indicating the child with his hands — “young people,” the Pope said with a smile.

Back in 2018, a non-verbal boy with autism, from the Pope’s own Argentina, brought joy to the audience, even if he exasperated his little sister in her non-successful attempt to get him off stage.

“Dear brothers and sisters. This child is non-verbal. He is not able to speak. But he knows how to communicate; he knows how to express himself. And he has something that has made me think. … He is free … and he’s made me think: Am I as free as this before God? When Jesus tells us that we must be like little children, he tells us that we have to have the freedom that a child has before his Father. I think this child has preached to all of us. And we pray for the grace that he might be able to speak. Thank you!”

Read more:Prayer has to be bold, says pope
Read more:Pope: Arm wrestle with God, be bold and insistent!
Read more:Pope gives youth with autism a few pointers on prayer 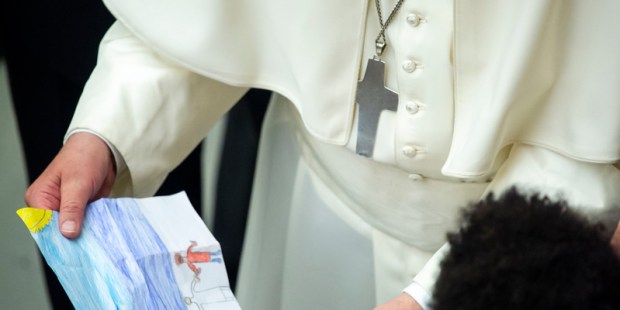