Why are illuminated manuscripts called “illuminated”?

This article is reserved for Aleteia Premium members

In his classic Renaissance and Renascences in Western Art, the German art historian Erwin Panofsky explained the Italian Renaissance was preceded by at least two major revivals of Greek and Roman antiquity. One of these was the 9th-century Carolingian “renaissance,” which Panofsky understood as a revival of classical forms that influenced styles of lettering and decoration, most of them now preserved in the National Library of France.

In these manuscripts, the main text is always accompanied with decorative flourishes, borders and illustrations. Some historians claim the tradition began in the Ostrogothic Kingdom (the Regnum Italiae) in the 5th century. Others explain it originated in the Eastern Byzantine Roman Empire. In both cases, illuminated manuscripts included prayer books, books used for liturgical services, and collections of psalms. From the 13th century on, the practice eventually continued into secular texts.

Most of these medieval manuscripts were written on parchment or vellum, a kind of “paper” prepared from animal skin or membranes. These parchments would be bound into books, called codices, which ranged in size from ones smaller than a modern paperback, to books that book require more than one person to lift them.

Chances are you write notes in the margins of the books you read. If so, you are part of a tradition that is almost as old as writing itself. Early copyists would leave spaces in the margins for further commentaries and annotations that could be related to the text itself, to the translation, or to include some indications for the readers. Sooner or later these commentaries were accompanied by miniature illustrations and illuminated initials that conveyed some important allegorical messages that could not be so easily transmitted in writing.

These often sumptuous books are described as “illuminated” for a rather straightforward reason: they are literally “lit up” (that is what the Latin illuminare means) with either gold or silver leaf, or with the brightness of the colors applied to its decorative motifs.

Make sure to visit the slideshow below to discover some recently digitized illuminated manuscripts, available online. 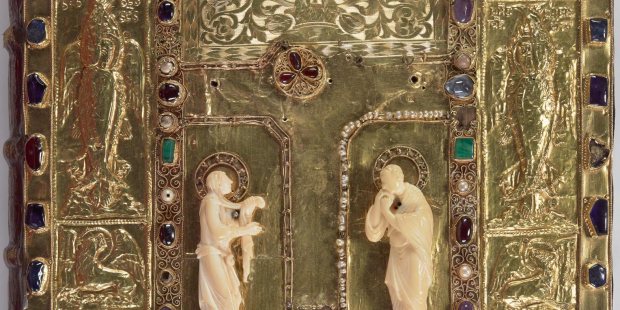 Launch the slideshow
Read more:See the process of creating a medieval illuminated manuscript by hand

The following is reserved for Aleteia Premium members

Free! - Without any commitment
You can cancel anytime

Discover all of these benefits: