The labors of St. Joseph

As universal patron of the Church, Joseph is depicted in art as ready to respond to the struggles of the industrial, nationalistic, and revolutionary age.

Much of the history of modernity has been written through the prism of human work. Poor labor conditions and unemployment plagued the industrial age of the 19th century, fueling many of its revolutions. Debates raged in bars, ballrooms, and over the barricades in the Paris Commune over whether labor restrictions should be abolished or if the state should control all employment.

Joseph as intercessor for a modern age

Between Adam Smith and Karl Marx lay a sea of differing theories, but how was a Catholic to navigate between the shoals of unfettered capitalism and the utilitarian oppression of communism? Amid this confusion and conflict, St. Joseph emerged in what might be described as his finest hour. While the Catholic Church was reeling from brutal blows, including the unification of Italy in 1870, which ousted the papacy from lands it had ruled for over 1000 years, Blessed Pope Pius IX called upon St. Joseph, declaring him the universal patron of the Church, and “imploring his intercession in all her great necessities.” This new title set the stage for Joseph to intercede in our thorny era of modern conflicts.

St. Joseph’s increased spiritual purview was celebrated in a lovely altarpiece painted by Giuseppe Rollini for the Church of the Sacred Heart in Rome. Built on land purchased by Pius IX with the intention of dedicating a church to Joseph, the project was halted when Pope Pius found himself exiled within the Vatican walls. His successor Leo XIII completed the church under its new dedication, but built a special altar to Joseph, where Rollini would attempt the first iconography for the universal patron. A peaceful luminosity fills the pictorial space, in contrast to the troubled revolutionary times. St. Joseph is the dominant figure of the composition, his gold and white robes evoking the colors of the papal flag. Mature, but certainly not elderly, he blesses the Basilica of St. Peter’s offered to him by a kneeling angel. Joseph cradles the Christ Child easily on one arm, while Jesus looks directly at the viewers instructing them to “Go to Joseph,” as written on the banner held by more angels above. Gentle yet authoritative, Joseph appears ready to respond to the cries of a Church struggling in the industrial, nationalistic, revolutionary age.

For his part, deeply concerned with the rise of Communism, Pope Leo wrote the encyclical Rerum Novarum – also known as “On the Conditions of Labor,” to address the dangers of nascent socialism. In it, the pope asserted the dignity of those who live by labor, those often disdained by the wealthy or aristocratic classes, by using the model of Joseph’s work. Leo noted that Christ Himself “chose to seem and to be considered the son of a carpenter — nay, did not disdain to spend a great part of His life as a carpenter Himself. ‘Is not this the carpenter, the son of Mary?’ (Mk.6:3).” 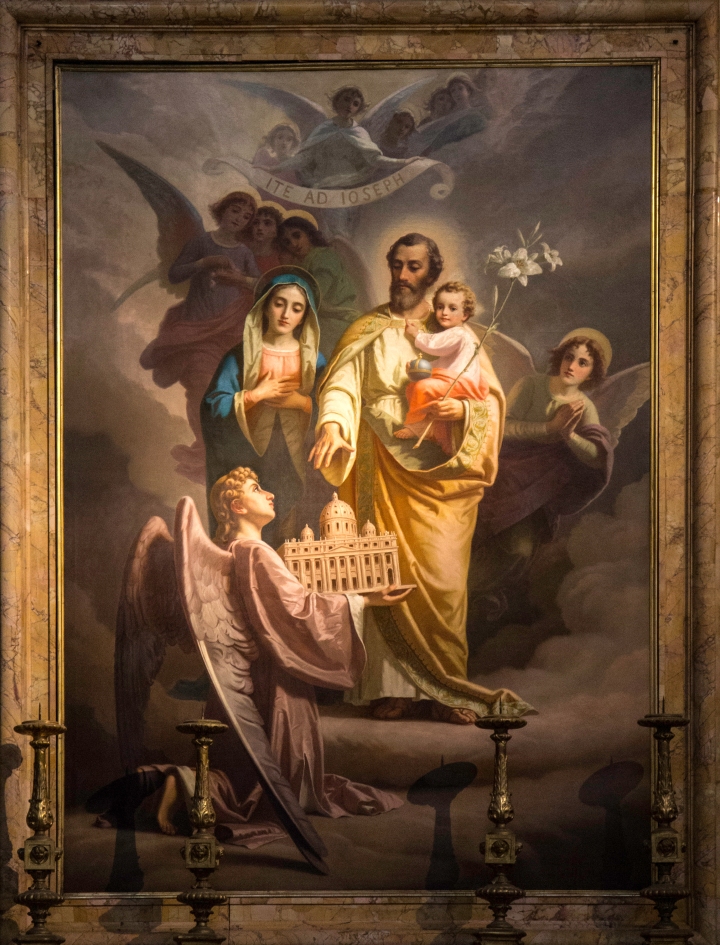 In this era, artists took an interest in images of Joseph in his workshop — plying his trade or teaching a young Jesus how to drill, lathe, or polish. Although it was not the first time these scenes were depicted, the 19th century subtly changed the emphasis. Medieval images of Joseph at work tended to show a man taken with attending to worldly needs, contrasted with the contemplative pursuits of Mary and Jesus. The Baroque produced evocative paintings of Joseph working in the shadows, while his Son watches gravely – the most beautiful of these probably produced by George de la Tour, with his signature candlelight effect.

The revival of the subject in the modern era produced a series of notable efforts, including the elegant mural in the Church of St Joseph in Nazareth. Painted in the early 20th century by an artist who remains unnamed, this work depicts the Holy Family pausing in their labors to watch the young Jesus, who has just fashioned a cross of out wood. The workshop is out in the open air, separated from the street by a wall of worn planks where Joseph’s wares hang. Stone steps lead up to their living quarters, but for the moment, Mary has paused from her spinning, Joseph has stopped sawing, and they both gaze upon Christ’s handiwork, the preparation of his own cross. Jesus wears a radiant white robe but his undershirt is the same earthy brown as Joseph’s tunic: the painter has united the foster father and his son through color, the common direction of their gaze, and through their work. As Joseph makes sacrifices for his family, so Jesus will sacrifice himself for the world. The setting is humble, the people poor, but their dignity is on full display.

The Holy House of Loreto contains another wonderful fresco of Joseph the worker painted between 1886 and 1890 by Modesto Faustini. Joseph’s spacious studio beckons the viewer to observe a day in the life of the Holy Family. Mary reads quietly in an elaborate chair, probably carved by her husband. Jesus, a golden-haired child, stands before his mother, hands clasped in prayer. This more decorous side of the mural represents the contemplative life of the Madonna and child. But this time Joseph is not excluded; as he works at his bench his gaze and the tilt of his body draw the eye toward the prayerful group on the right. Through his long hours of labora, or work, St. Joseph also participates in prayer, ora.

St. Joseph was officially recognized as the Patron Saint of Workers by Pope Pius XII in 1955, just as the cold war was escalating between communist and democratic countries. His feast day became May 1, the international holiday dedicated to workers, to combat the communists’ utilitarian view of laborers with the Christian belief in the inherent dignity of every human being.

This time, however, artists didn’t seem to have a response. No Giotto, Murillo, or George de la Tour has arisen to lead art into a new age of Josephine iconography. One can hope that with Pope Francis’ impetus in declaring 2021 the Year of St Joseph, this will be a new springtime of discovering the many virtues of the patron saint of human work and developing new ways to honor him though the arts.